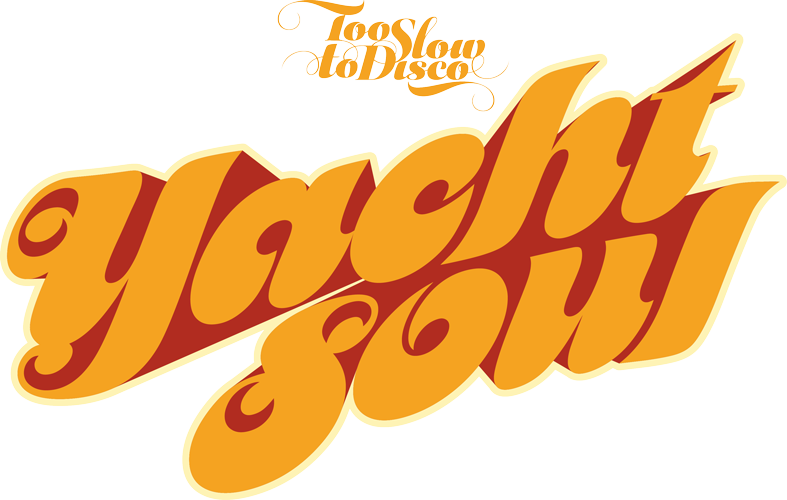 Too Slow to Disco – Yacht Soul 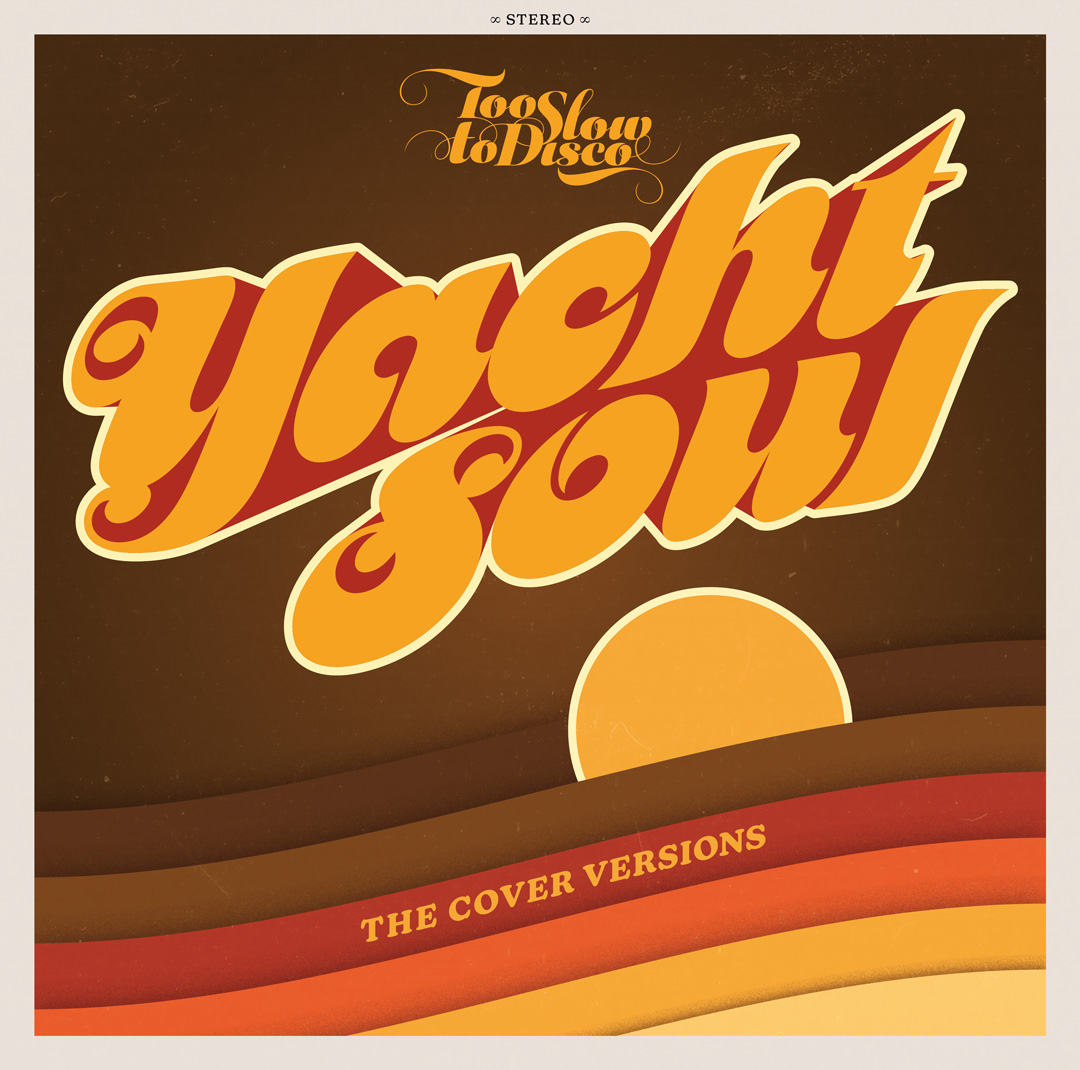 “Wait… keep it on that station… is this the Doobies? That backbeat – it’s on fire! Whoa… that’s Aretha! Turn it up…”

It’s perhaps an obvious metaphor for us to reach for, but the whole Too Slow to Disco project has always viewed music a bit like ocean waves. They keep crashing back, slightly different, always bringing new things to the shore.

When we started out, our mission was to bring you the very best, over-musical-yet-under-remembered tunes – beautiful songs produced at incredible expense by the undersung geniuses of the 1970s and 80s. Next we wanted to share the musical story of the insanely talented, but often criminally overlooked, women writers and performers of that era. The waves kept crashing in though, and our story then moved bang up to date with our ‘Neo’ series, bringing you the best contemporary tune-makers who share our obsession with the AOR era.

But those beautiful waves keep crashing, and our latest project takes us to another delectably under-visited stretch of the shore: an incredible group of Black artists and their soulful takes on the smooth classics of those predominantly white Westcoast AOR/Yacht Laurel Canyon Hippies. Two worlds, paying their debts and respects to each other, in a series of brilliant covers that just jump out of the speakers. Ladies and gentlemen, be very reverent for the sound of Yacht Soul.

Our sherpa up this impressive musical mountain is none other than esteemed DJ, journalist, crate digger and renowned musicologist Greg Caz. Greg’s expertise at joining the dots of pop history made him the perfect guide for this new story and wonderful collection:

GREG CAZ:
„The history of Black artists covering songs primarily associated with white writers and performers is a very long one, stretching all the way back to the early 20th century. These covers generally happened for a variety of musical and commercial reasons ranging from the desire to reach more white listeners to the simple fact that the performer really liked the song in question and felt they could find something personal and unique in it for their own version. Most popular music of the pre-Rock N’ Roll era was based on songs written for plays and films and that material, known today as the Great American Songbook, constitutes a large percentage of the midcentury Jazz repertoire. Names such as Rodgers & Hammerstein, Harold Arlen, George & Ira Gershwin, Irving Berlin, Cole Porter, Johnny Mercer, Sammy Cahn and many others are all too familiar from the credits of Jazz albums. As time went on, revolutions in the music business brought about new generations and new forms of making music and the non-performing songwriter-for-hire gradually faded into the background (even without disappearing entirely) as artists became increasingly expected to generate their own material. Even with all this, Rock and Pop artists found covering Blues and R&B songs to be a reliable source both of great material and of artistic credibility. Meanwhile, Soul and R&B artists would routinely cover current Pop-Rock songs as a way of expending their audiences and crossover potential…which brings us to the material on this latest installment of the Too Slow To Disco series.

What the tracks on this compilation all have in common is that they are songs written and/or popularized by Pop/Rock artists. In some cases the performers here are tackling these songs because they genuinely like them and find that they give them something interesting to work with. In other cases the decision to record the song in question perhaps comes from a shrewd plan to cover all the market bases. But whether the motivation was purely creative or strictly mercenary, these recordings demonstrate the folly of arbitrary genre separation and also served to introduce these artists’ fan bases to great songs they might not necessarily have gone out of their way to find.

Take the Main Ingredient’s sublime cover of Seals & Crofts’ “Summer Breeze,” for instance, one of two songs by the duo covered on 1974’s brilliant Euphrates River LP. The Isley Brothers had put their indelible stamp on S&C’s hit the previous year, and in such a definitive way that one would think no further covers were necessary. But the MI’s version more than justifies itself and actually proves as essential as the Isleys’ by virtue of Bert DeCoteaux’s gorgeous and elegant arrangement as well as Cuba Gooding’s distinctively beautiful voice.  The Pointer Sisters entered their period of greatest sustained success with their best-known lineup of Ruth, Anita and June starting in 1978 with the heavily Yacht Rock-oriented Energy LP, their first with producer Richard Perry. Their energetic cover of Steely Dan’s “Dirty Work” is one of the many standouts on an album that also saw them tackle Bruce Springsteen, Fleetwood Mac, Loggins & Messina and the Doobie Brothers.

Speaking of the Doobie Brothers, their “Takin’ It To The Streets” is brilliantly covered here by Quincy Jones and friends in a version taken from Q’s Sounds…And Stuff Like That album. Vocals are handled by a pair of veteran New York session vocalists, Luther Vandross and Gwen Guthrie, who would both soon afterwards make their mark as solo performers. Another Michael McDonald/Doobie Brothers hit that appears here is R&B stalwart Peabo Bryson’s take on “Minute By Minute” from his Paradise LP (1980). McDonald’s voice and music were well-established on urban radio formats by this time which made this big Doobies hit from the previous year, co-written with Lester Abrams of Crackin’, a natural fit for Peabo.  Michael McDonald’s colleague Kenny Loggins is represented here by a big hit he co-wrote with MM (once again), “This Is It,” which serves as a perfect jumping-off point for Millie Jackson to deliver one of her patented saucy sermons and soulful performances. It ends up sounding as if Kenny and Mike wrote it just for her.

In the case of Greg Phillinganes’ “Lazy Nina,” Donald Fagen DID write it just for him, and getting an exclusive song from Fagen (as well as getting Michael Jackson to guest on the same 1984 album) is the kind of feat that only a true studio-session MVP like Phillinganes could possibly pull off. His was a name that seemed to appear on almost every top-selling blockbuster album of the era and the stars he worked for and with were only too happy to return the favor.
On many albums with Greg Phillinganes’ name in the credits you would also usually find the names of his colleagues, the members of Toto, who played a big instrumental role in shaping Michael Jackson’s world-beating success alongside Greg. “Georgy Porgy” is a song from Toto’s 1978 debut album that immediately became a big favorite on R&B stations with its hook sung by another Toto associate, Cheryl Lynn. It has been covered and sampled many times but Fantasy Records’ Jazz-Funk male-female vocal group Side Effect were perhaps the earliest to do it as it fit their style so well.

The Brothers Johnson were also key players on the LA session scene, and part of the same Quincy Jones team as Greg Phillinganes and the Toto guys. Three of the Toto guys, in fact (Steve Porcaro, David Paich and legendary drummer Jeff Porcaro) wrote “In The Way” for Louis and George, which the Brothers recorded for 1981’s Winners, their fifth album. It combines the patented BrosJo Funk with the kind of breezy LA Yacht-Rock sound that all of the record’s participants were right at the heart of creating.

That same sound is in full flow on “Nothing You Can Do About It,” a veritable West Coast/AOR classic by two of the chief architects of that sound, David Foster and Jay Graydon. First recorded by the Manhattan Transfer in 1979, it was then recorded the following year by its writers under their Airplay project, but the version we have here is the 1982 cover by Crackin’ vocalist Leslie Smith, a true Funk veteran (previously, like many of his Crackin’ bandmates, of the L.A. Carnival) who also embodies the genuine R&B side of the West Coast/AOR ethos. He is joined by many members of Crackin’ on his solo album Heartache, which also features a soulful Ned Doheny cover. And while we’re on the subject of soulful Ned Doheny covers (are there any other kind?), Trenton, New Jersey’s The Ebonys give us a smooth and spectacular version of “A Love Of Your Own,” best known of course via the version by the Average White Band, whose Hamish Stuart co-wrote the song with Ned.
Jazz-R&B veteran Dee Dee Bridgewater takes a similar approach on her 1976 cover of Hall & Oates’ “She’s Gone,” which becomes “He’s Gone” in her amazing gender-switched rendition. As with many of the tracks on this collection it was recorded in LA and the seasoned players on this version include the likes of Joe Sample, Wilton Felder, Ed Greene and Ray Parker Jr. The song itself had just become a hit three years after its initial release on Atlantic, after Daryl and John had gone on to success on RCA. This self-titled Dee Dee album is on Atlantic so her being encouraged to cover it (as well as the fact that it’s a great song for her to tackle) makes a lot of sense.

The same core group of musicians could be found on Betty Everett’s Gene and Billy Page-produced final album, 1975’s Happy Endings, on which she turns in a stunning Modern-Soul version of the Beach Boys classic “God Only Knows” which bears many of the stylistic hallmarks of the main employer of the producers and players on the record: Barry White. It would be very interesting to know if Brian Wilson heard this version and what he thought of it! Billy Paul had been searching for another hit like “Me And Mrs. Jones” since 1972 for about five years when he released this cover of Paul McCartney and Wings’ recent hit “Let ‘Em In.” Despite his status as a Jazz Lounge singer-turned-Soul man, Billy had always been open to material from a wide variety of sources and had even covered Steppenwolf’s “Magic Carpet Ride” on an earlier album. So “Let ‘Em In” fit him like a glove, especially as it allowed him to add extra social significance to the song by adding the names of assorted civil rights and political leaders to the lyrics.

Like Billy Paul and many other artists featured on this collection, Tavares were also adept at adding a soulful spin to Pop material, having released their own cover of “She’s Gone” around the same time as Dee Dee Bridgewater. Their cover of AOR stalwart Bill LaBounty’s “I Hope You’ll Be Very Unhappy Without Me” is yet another shining example of how R&B-influenced the “Yacht Rock” sound, always was at its core, because, once again, it sounds like it was written just for them and sounded equally appropriate on Pop and Urban stations. Chaka Khan’s cover of Fleetwood Mac’s “Everywhere” is natural and appropriate for many reasons. Both Rufus and the Buckingham-Nicks edition of the Mac rose to prominence simultaneously in the mid-70s and the two LA-based bands often seemed to be Pop-Rock/Funk/Soul mirror images of one another (I sometimes like to refer to Rufus as “Fleetwood Black”!). Chaka is known to have broad musical tastes so for her to cover a Fleetwood Mac song is simply par for the course.

The story told by all these cover versions is one of blurred lines between genres and how musical categories are often ultimately artificial constructs that melt away when either an artist is seeking for a way to expand their audience reach, or they just quite simply hear a song they really like and feel that it offers them the opportunity to stretch their creative wings, genres be damned. As we’ve seen, many of these cases of Black artists recording songs by white writers happened in a very direct and natural way, and for logical reasons. Further proof, as if further proof were even needed, of the unifying power of great music.”