Introducing »Too Slow to Disco – Volume 2«

»I had a real awakening last summer, I’ll be honest. It was like a personal revelation, y’know? Really felt like the drapes were thrown open… God, sometimes you just gotta let the light flood in. It’s Carly right? Tony. I’ve seen you before here, I’m sure of it…« 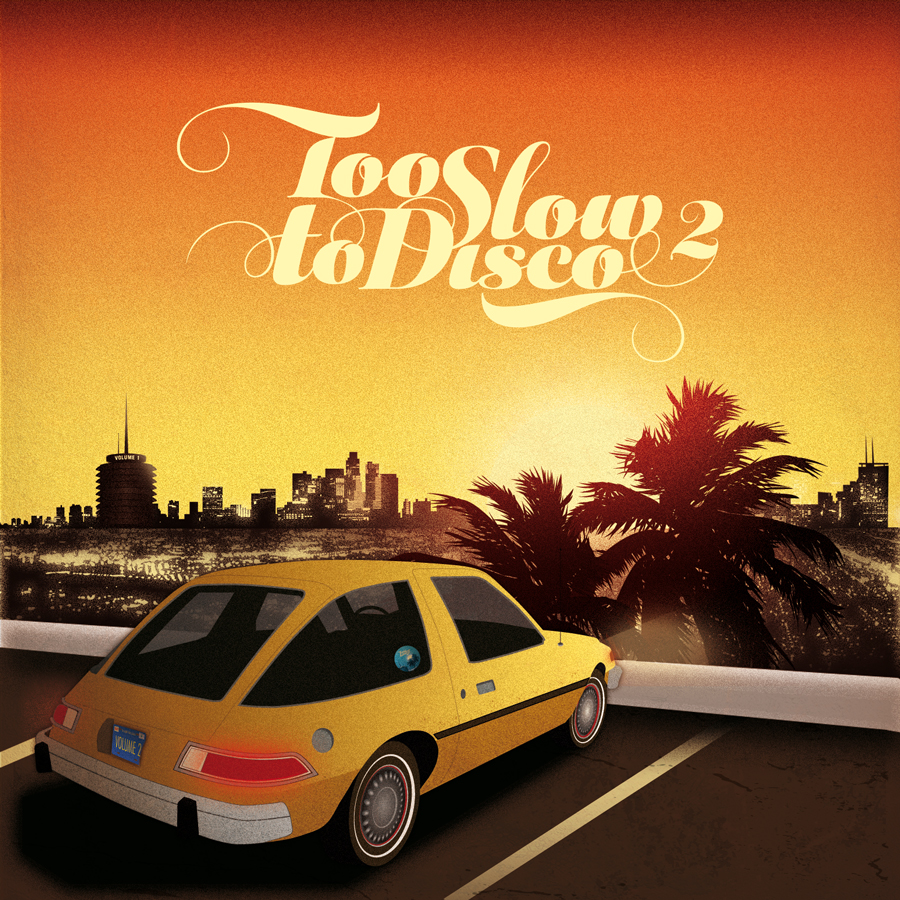 With his jacket artfully thrown on the back seat of his Levi-jeans edition AMC Pacer, Berlin’s renowned pop archaeologist, that master musical excavator DJ Supermarkt, jumped excitedly into the driving seat. Time to hunt down more of those dusty mastertapes nestling forgotten in the attics of the West Coast’s premier late 70s smooth music makers.

And so here we are once more, possessed of another perfect collection of missing-in-action, late-70s/early-80s smooth, singer / songwriter, AOR-paced, yacht-based pop and blue-eyed soul. Every song brims over with that West Coast sunshine, and for Volume 2 we’ve dug even deeper into obscure corners of LA, London, even Cologne, to create an even more potent soundtrack to that lost world that’s somehow always with us.

Like any follower of a guru, you need a guiding philosophy – that’s why once more we’re championing the lost classics, the no-hit-wonders, the ones that got away. Sometimes the artists imploded, dissolved in legal wrangles, went AWOL from the studio, maybe joined a cult – it’s not always… clear?

However, what we do know is every cut on this record deserves your love and attention. DJ Supermarkt turned international music-detective to track down bass players, distant family members, making discreet-but-forceful enquiries about the contents of lofts and basements, to try to find the masters of tracks that often the writers themselves had long forgotten. It’s fine, you can thank him later.

Since Volume 1 debuted it seems like the whole world has switched back on to this amazing era of music making, from Father John Misty, BC Camplight, Andrew Combs, Liam Hayes, Silk Rhodes, to the entire soundtrack of »Guardians of the Galaxy«. Smooth is no longer a dirty word.

Drop the needle and bask in every detail of that glorious over-production, and recall an era when the music industry had the time, money and sheer musical talent to make everything BIG. Pay no mind to the cynics, the cooler-than-thou-erati, or the buzz kills of the sincerity police. These are big tunes that deserve to be hits, even if it’s taken 40 years to get there, driving slowly up that winding California coast road in the wonderful warm summer air.

Speaking of the road, you’ll find another 1970s totem on the sleeve of TSTD Vol.2. Our cover star is the aforementioned AMC Pacer, and with good reason. This little beauty, »the first wide small car«, derided and unloved at the time, is now rightly regarded as a cult-classic. Despite boasting futuristic gizmos (which often left the car garage-bound), weirdly oversized windows (now the norm), it was shorter than a Golf yet wider than the biggest Mercedes, and as a result flopped pretty magnificently. But if it was seen as a symbol of excess-over-reason, designed with deluded grandeur, undermined by a million crazy details, well it belongs right here amongst the fabulous follies of Too Slow To Disco 2.