»Stanley stared approvingly at the gently swaying crowd. Young couples mostly, a few singletons on the make, the first cocktails of the night being assembled by the finest fun scientists working on the coast. He blurred his eyes. Periodically you had to recall that it wasn’t actually 1988. That it wasn’t that place either… Monaco? That was it, it wasn’t Monaco. Yet he smiled as a tinkly piano riff elicited a polite air pump from three dancers near the booth. This kind of music seduces, he thought. Musical vitamin D. It knows what you want, and how to give it to you. He raised an imaginary glass to the timeless law of the dancefloor, that sunset manifesto.« 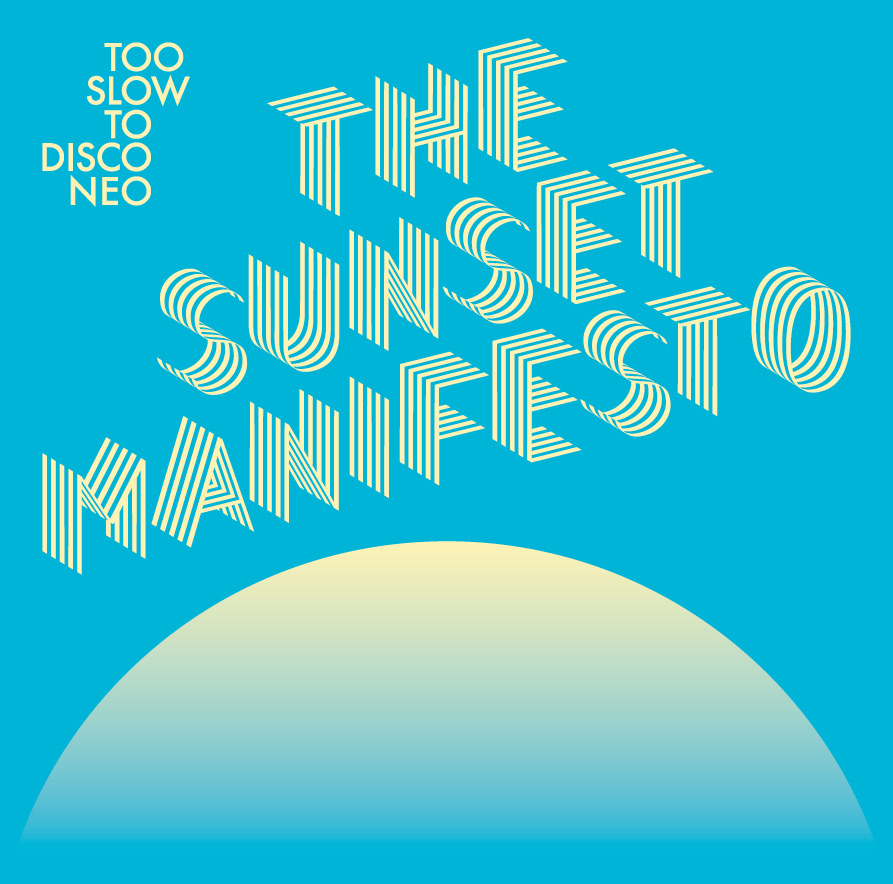 Have you ever felt so wistful for the dance floor? Have you ever been so in need of getting your personal shimmy on? Yep, us too. Not to worry – Team Too Slow To Disco has your back. We present: The Sunset Manifesto. Sixteen ways to slowly party wherever you are right now, mes chers. Sixteen ways to add effortless chic to your (delete as appropriate): lockdown kitchen disco / home-office yoga studio / commute to the living room. Sixteen new party pals, oh yes.

Our intention? To bring you a globe-trotting playlist of some of the most sophisticated, adult-orientated and dance-inducing pop music from today’s exponents of that Too Slow to Disco sound. Like a good detective about to crack a big case, DJ Supermarkt has been tailing these acts for quite a while now. There’s been a picture forming, a scene coalescing, across countries near and far.

It’s an eclectic gang, from Westcoast USA to Norway via a hundred places in between – but with a shared golden thread. That warm sonic palette that escaped from Laurel Canyon folkies and LA session gods is there, remade by a contemporary electronic sensibility. As acts they’re all touched by that lazy, daytime disco or balearic style. And for many it’s a chance to rediscover analogue studio techniques to make music for tomorrow’s dancefloors.

But there’s something new in the air. These musicians aren’t trying to recreate the past or turn up to the club on horseback. No, this is more like “parallel pop” – the soundtrack to a delightful, if imaginary, contemporary world. It’s the first heat of the sun on your face, as the airplane doors open. The frozen lime tang in the ice-cold vodka tonic. The sense that you’ve finally arrived somewhere you don’t know (but know you love).

So… who signed up to the Manifesto? There’s Kraak & Smaak – possibly the Netherlands’ finest exponents of cinematic groove (we only wish ‘Hotel Sorriso’ had a detective show to accompany it. Sigh). Poolside turn up and put some serious beach-facing bubbles in your glass with a Vibes4YourSoul remix. Moods from Rotterdam throws down a baroque remake of the mighty Vulfpeck’s ‘Backpocket’ – which is quite something. Then there’s name-winner Glamour Hammer, with ‘Is It True’, a slice of almost-Stevie W. pop perfection.

The parallel world continues to take shape with London’s PREP, whose ‘Love Breaks Down’ we humbly think Rod Temperton would have been chuffed to turn out. The clothing-choice-as-musical-motif is strong with Germany’s Satin Jackets and their sparkling ‘Think about it’. Turbotito lays down something we can only describe as wistful-disco with ‘Heart and Soul’. And Roosevelt, a stranger to no-one at this point we suspect, teams up with Falcon Punch on a deliciously airy refit of ‘Take Me Back’.

But there’s more… king of the scene Yuksek, brings us a beautiful slice of Balearic Brazilian lounge-disco on ‘Do Beijo’, one that will put an inch of air under your feet. Ür-stylists Private Agenda seem to have woken up inside the soundtrack of a smash late-80s Hollywood film with ‘4 Step’. Sweden’s Kimchii captures the magical realism that you find in much of this music, with a Satie-esque quirky-pop paean to the fine art of windsurfing. And LA’s Luxxury aka Blake Robin is convinced he can win you over ‘At Any Moment’ especially with DoctorSoul’s slick-as-you-like dub rework.

Heading back north, Norway’s Diskobeistet drops by with an extended ‘Baner Vei’ (imagine a blissed-out Kraftwerk with more cocktail umbrellas)… Knight One shares his ‘Imagination’ – a supremely glitchy-glacial groove. And, completing the manifesto, England’s James Alexander Bright brings us ‘Under The Sun’ – which is guaranteed to induce mountainside swaying as the light finally fades behind the trees.

Perfect for the rooftop bar (the one in your living room)

We hope this leaves you party-facing, shimmy re-enabled. This latest collection are all tunes that are as at home in your home, as in that imaginary nightclub overlooking the sea. Sixteen fortunate cookies to unwrap, discover and devour. Enjoy the bottled sunshine (responsibly)!