Introducing »Too Slow to Disco Brasil«

»The thing about parties,« said Janice, putting down her drink, »is you need to arrive with someone connected, someone… cool. Otherwise you’re jus’ gonna get bummed out, stuck chatting to some realtor or God forbid, a dentist from West Hollywood. ‘Nother Caipirinha?« 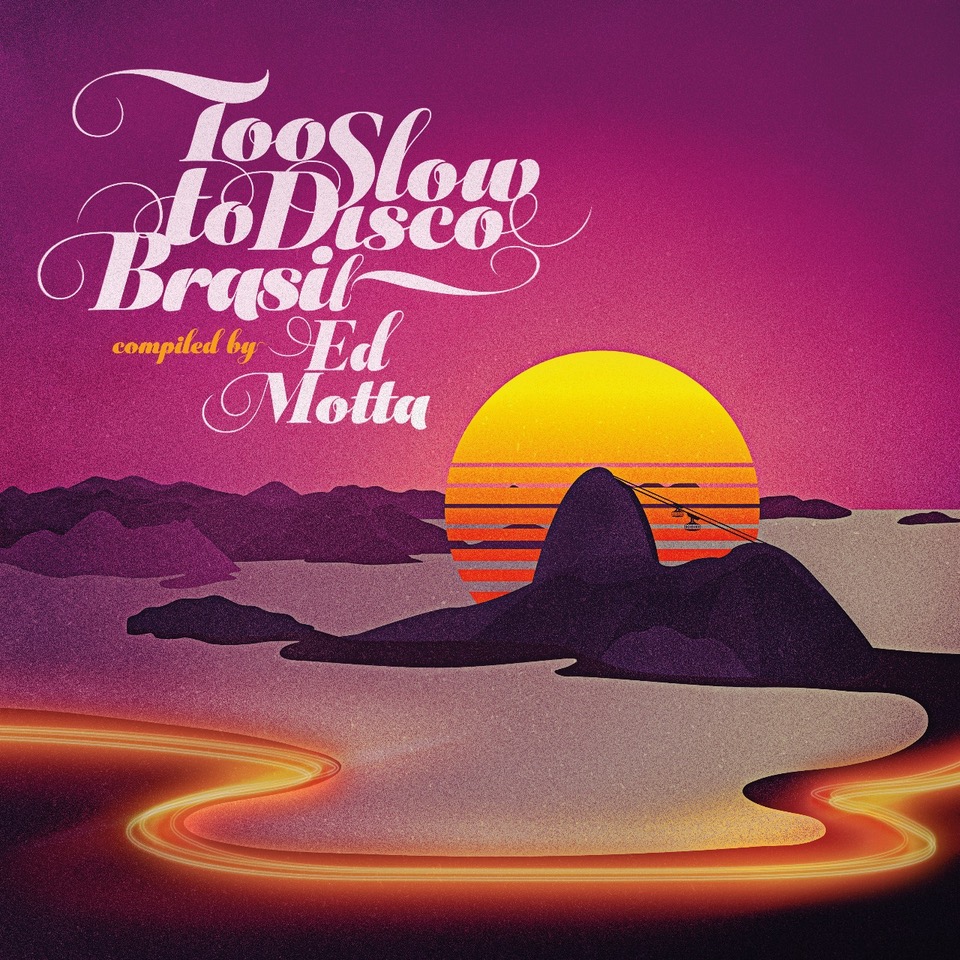 We hear you Janice. It’s the same dilemma when your much-loved LP compilation series decides to visit somewhere exotic and different. You need an invite, a guide. Fortunately for us, and you, for Too Slow to Disco Brasil we’ve been escorted to the Brazilian AOR party by one of the very best, a certain Mr Ed Motta.

We’d like to introduce you to this giant of musical endeavour, the ‘Colossus of Rio’, as he’s known. For Ed’s sweetly agreed to be our point man on all matters smooth for this latest TSTD collection, where we take a dive into an often overlooked side of Brazilian music: Brazilian soul, funk and AOR.

Meet Ed Motta – a true Brazilian original
At the end of the 1980s Ed Motta burst upon the music scene as a major singer and one of the writers and producers in the band Conexão Japeri. This young nephew of Brazil’s legendary soul icon Tim Maia was an instant hit on the Carioca show circuit and the band’s 1988 debut album, „Ed Motta and Conexão Japeri“, confirmed his promise, including several big national hits. The songs were marked by a lavish musicality and introduced strong soul, jazz and funk elements into Brazil’s conventional pop-rock scene. It was soon clear that at the precocious age of just 16, Ed Motta had a musical vision and heaps of ambition.

He’s now fifteen albums into a career that hops from genre to genre, perhaps one of the savviest music makers and curators out there. He is a refined practitioner of jazz, funk, soul, AOR and much else besides, having worked with everyone from Gilles Peterson to Roy Ayers, 4Hero, Seu Jorge, Patrice Rushen, Greg Phillinganes, Bo Diddley, Incognito, Ryuichi Sakamoto and many other insanely talented musos. And as we’d heard good things about his home country’s undeniable chops in the smooth arena, in particular a glorious two decade run of song-making through the seventies and eighties, DJ Supermarkt decided to make that call:

“Ed, it’s Germany calling… Man, we need your mind, your taste, and your style… are you up for curating a history of Brazil’s finest adult-orientated for the Too Slow to Disco crowd?”
“Sure thing, I’d love to!”

Ed’s in his forties now, with Grammy nominations under his belt, ever the restless collector of new music, ideas and obsessions. His home somehow contains an ever-growing collection of over 30,000 records from all over the world, as well as his high-production recording studio. Music magazines line up to visit his holy grail. This guy breathes music from dawn to dusk. And he’s notorious for his passionate interest in the world – if he finds a thing he loves, it quickly spirals into obsession, from classic films to exotic fish, from lost vinyl gems to the finest natural wines in the world… The perfect curator, then.
And to understand how much of an inside game Ed is playing, you need look no further than his own love letter to the genre, 2013‘s “AOR” LP. On that record he laid down his own personal take on the high production values, sophisticated harmonies and melodies of the West Coast sound, referring back to bands like the Doobie Brothers, or Steely Dan’s most obsessive studio phase – the Aja and Gaucho years. “AOR” was like a mission statement, and definitely brought him international recognition as an influential collector, protagonist and expert in every aspect of this music.

Ed’s enthusiasm just pours out of this glorious double album, and perhaps that’s no surprise, as – despite starting out as a musician looking for inspiration overseas – he’s latterly also been a champion for homegrown genius. Encouraged by his peers and friends in places like LA, Paris and London, in the last twenty years he’s been feverishly unearthing the gems of Brazil’s most jazzy and sophisticated pop era. (Well…, being Ed, if we’d asked for a collection of Iceland’s rare folk music he would probably have been just as up for that…)

To be clear though, Brazil, far from being influenced by its neighbours to the north, came to smooth music its own way, developing it out of its longstanding love affair with jazz and funk. Brazilian music has always been animated by rhythm, using it to produce sophisticated yet sensual songs, so there’s an effortless swing to many of the songs Ed’s gathered here. These are tunes full of catchy vocal lines, ones that immediately get stuck in your head, relating simple tales of love and dancing with a perfect poppy precision, backed by soulful grooves.

In this collector’s compilation, you’re coming on a kind of expert guided time travel mission – just picture yourself following Ed’s fingers as they trace along the sleeves in that massive library-sized vinyl vault of his. So we dart back through over two decades of music making, dancing in one style then the next from soul to funk to AOR, you’ll feel the air coming out of the horn section right the way through, and a mixologist’s golden touch tying everything together.

The artists Ed has play-listed for you include über-obscure figures like Carlos Bivar or Gelson Oliveira & Luiz Ewerling – both of whose songs here derive from privately pressed albums – so rare they’re not even listed on Discogs! He’s also gathered together a real pantheon of Brazilian musical heroes like Rita Lee (who was part of the legendary Os Mutantes), Cassiano (one of the founders of Bossa Trio and Os Diagonais) and million sellers like Roupa Nova, lovingly referred to as ‘the Brazilian Toto’ (who would have thought that would become a compliment by 2018?)! And as ever with the Too Slow to Disco series, the artists might be new to you, but they’re always bringing a killer tune.

Finally, Ed would like to share a few pointers to get you in the mood for this stylish listening experience: „Before slipping this LP on, you need to nail the AOR modus opeara… That means: a Hawaiian shirt à la Magnum PI, loafers without socks as in Miami Vice, jump in your convertible and drive under the coconut trees. This is a sunset ride through Rio de Janeiro, Los Angeles, Miami, Hawaii. Aloha!“

Back at the party, and above the heads of the dancers you catch a glimpse of Ed passing an LP to the DJ. The sun’s dipping behind the mountains above the bay, and the sound pulsating from the speakers sure has a beguiling melody. There’s a definite touch of Earth, Wind and Fire about that slinky groove. So join us to discover another dimension of the Brazilian sound: Too Slow to Disco: Brasil – Compiled by Ed Motta.