Introducing »Too Slow to Disco – Volume 3«

»I love how laid-back Christopher’s gotten. I mean, since he met Astra, really—« They gazed across the room at the softly shuffling couple. Sally started pouring drinks on the terrace while two gate-crashing realtors flirted spiritedly with her sisters. The music softened the party’s early edges, a folky voice floating above a summer beat, the strings in sync with the ocean waves beyond the open windows… 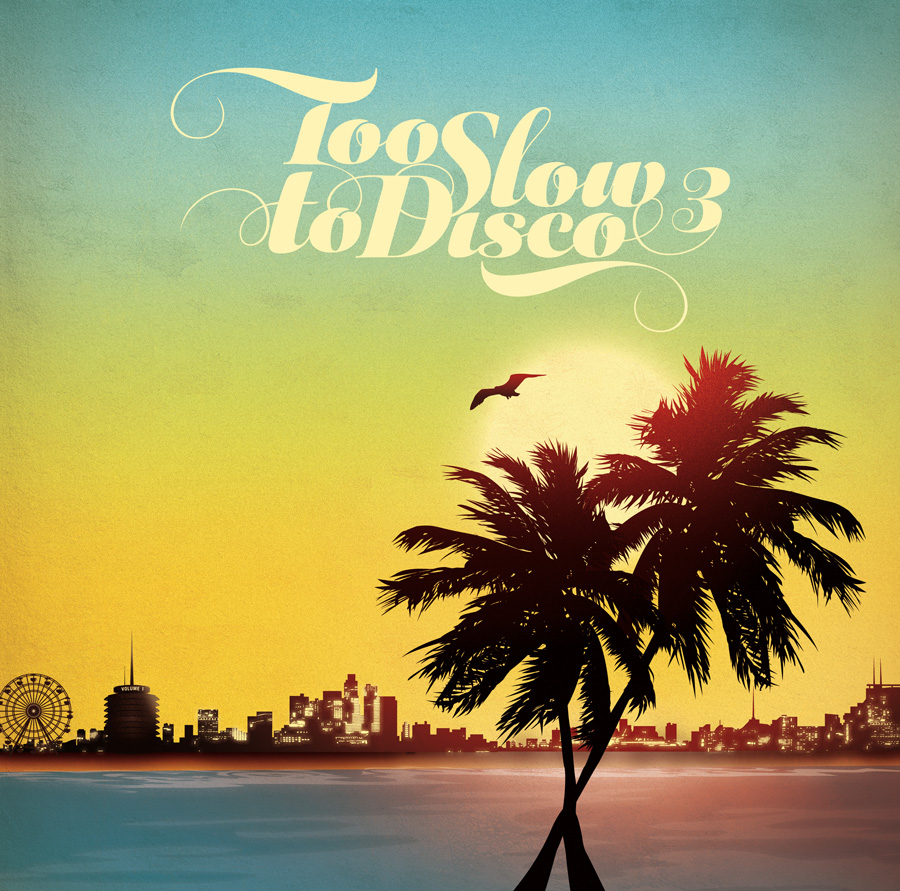 Think of it as smoothness for a tense world. Glorious, even shameless, musicianship from before computers replaced real players in the studio. Another amazing collection of songs by the most talented back-room gals and guys. DJ Supermarkt’s mission remains the same: to excavate some
of the finest lost songs from the recording business’s imperial phase. From groovesome to mellow, sinful to spiritually yearning, all of these tunes deserve a second chance at the limelight.

As ever, DJ Supermarkt has somehow prised open another box of obscure gems. The focus remains on slightly difficult love affairs set to grooves gentle enough to mix cocktails to. This is the sound of jazz-tinged regrets and sun-drenched positivity, from incredible musicians who nailed the songs, even if they weren’t all quite so ready for fame.

We’ve got an accidental pop hit crossover from none-more-fusion jazz guitarist Lee Ritenour. A dab of Christian funk from Archie Cavanaugh and his troupe. You’ll even find a bizarrely commercial sounding Grateful Dead laying down the chart-bothering beat of ‘Shakedown Street’ (we assume the A+R guy had a gun; certainly it took DJ Supermarkt about four years to prise the rights from Dead headquarters). Steely Dan’s go-to sax man, Cornelius Bumpus makes an appearance with some angular funk, while Larry Carlton (another associate of Don and Walter) turns up the guitar drenched white soul on ‘Where did you come from?’.

And we’ve looked beyond L.A. this time, discovering a few exotic exponents of the West Coast sound from more distant shores. Our first non-English sung TSTD track comes in the shape of Dwight Druick, legendary Canadian songwriter, delivering a fine slice of ‘Montrealian’ disco-funk. Then there’s the groovesome Stars’n’Bars from Sweden (in its first ever official re-release), and even one from the UK’s Billy Mernit, with a lush torch song we’ve been desperately chasing for years.

And given 2016’s sad legacy of musical departures, Too Slow to Disco has also become something of a fitting tribute to this wonderful generation of melodic dreamers and talented instrumentalists. Valerie Carter who appeared on 2016’s The Ladies of Too Slow To Disco passed away recently, as did Maurice White (Earth Wind and Fire), who signed her to his label. Also gone are Glenn Frey of The Eagles and Rod Temperton, the incredible writer and producer behind Thriller and many other songs that have graced all 3 volumes of Too Slow… Their music lives on though, as influential as ever.

So we present Too Slow to Disco – Volume 3… Bottled sunshine and musical chic, from back when the most orange thing about America was the California sunset.