Introducing »Too Slow to Disco – Volume 1«

»You know, I’ve just got to say, you’re looking great. Noticed it when you first walked in, what is it, … microbiotics, EST? Whatever, you look and sound fabulous, really, positively glowing. You and Margo should really come out to the beach house this weekend, we’re having a little get-together …« 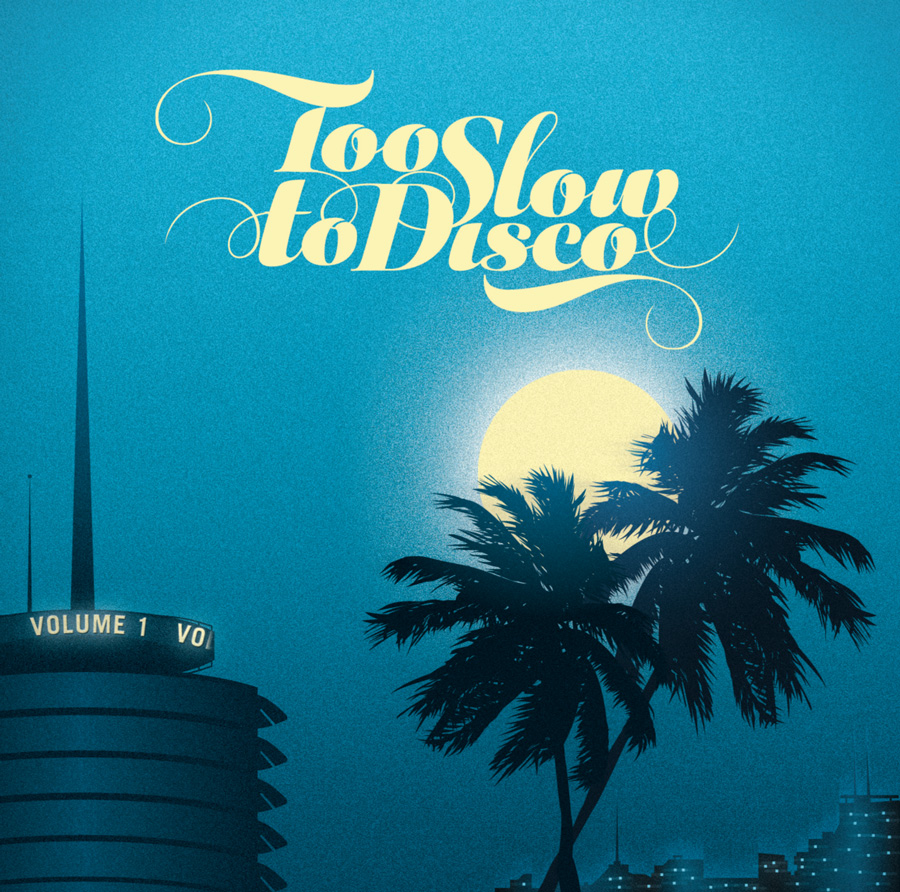 Ah, the mid-70s »Me Generation«, not so happily remembered. And for years now in the taste-conscious music world, people have laughed at the L.A.-sound with its super-smooth, over-lavish, luxury-laden excesses. Chord progressions as thrusting as that bridge across the bay. Love the white blazer by the way. Neiman-Marcus, right?
But »Too slow to disco – vol. 1« isn’t interested in your ageing hang-ups. As you know, as music ages the best parts shine through, and this collection is a delectable document of this forgotten phase of the mid-70s West Coast music world. We’ve unearthed some of the lesser-known but still beautiful mood music of this period, by people who were often just starting out, or would write their biggest hits years later, but who surfed the West Coast wave penning some total gems. So, yes, welcome to phase 1 of our PRM (Personal Rediscovery Movement, cult fans).

This sound is everywhere these days, echoing down the years, influencing the likes of Midlake, Haim, Gonzales, John Grant, Ariel Pink, Jonathan Wilson, Rhye, Devendra Banhart, Destroyer, Phoenix, out to the more discofied sounds of Chromeo, Breakbot, and recently Darkside. And what was Daft Punk’s »Random Access Memories«, if not an album entirely dedicated to late 70s L.A.? (And indeed Thomas and Guy recorded with some of the most legendary late 70s studio musicians, quite a few of whom appear in younger guises on this very compilation).

And anyway, You can’t blame music-loving youngsters for falling in love with this style and sound – it’s almost otherworldly in its deft smoothness, so effort­lessly uplifting, all those warm and breezy melodies. You think anyone ever got tired of an endless beach with a beautiful sunset? That’s why across Europe and the USA soft-rocking mixes and re-edits are gently filling up the music clouds, and once more tastemakers putting quality songs in the party playlist. Looking at you Todd Terje, Northern Rascal, LNTG, Alkalino, …

Giant hanging coke spoon? Best club in the world! Yes, pop culture has always liked to use excess as its default measure of historical worthiness. That’s why the cable channels and bookstores are filled up with books, documentaries and compilations covering the late-naive hippie sixties/early seventies West Coast in endless detail.

But the excessive, megalomaniac, big ego-bands like The Eagles, CSN & Y, Fleetwood Mac kind of sucked all the oxygen out of the mid-70s era until Punk and Disco provided two blessedly different routes out of all those Lear Jet parties and chansons about your torrid affair with the drummer / bassist / vocalist. As a result loads of great artists and songs have simply been forgotten.

Musical pleasures should always be unabashed, so with this first volume of our TOO SLOW TO DISCO compilation-series we want to share some of the great acts and songs that made the mid-late 70s California scene so awesome.

And pleasingly (judging from the many telephone calls we had to make in order to find the mastertapes) most of the artists are very much still alive and kicking.

So, think of us as your enablers: in just a moment you too can be transported from your current grey, drab modernity to a lost world, a sun-drenched land of possibility, where the music is as deftly arranged as the cocktails they’ve just brought round. Good? Oh that’s good, yeah …